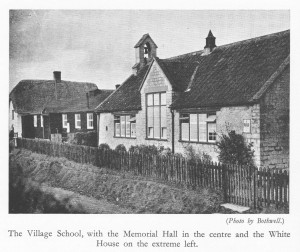 Cherhill’s first Village Hall was the Memorial Hall, a building which had previously been the YMCA building at RAF Yatesbury during the First World War.  After the Armistice the Villagers wanted to commemorate the Cherhill lads who had lost their lives and it was agreed that a ‘Parish Institute’ would be a suitable memorial. A public subscription raised the sum of £58 9s. 0d. A Memorial Tablet (still visible in the church) cost £11 14s.6d. and the balance of £47 14s. 6d. was used to furnish the Memorial Hall which was moved to Cherhill with the help of the Cooperative Wholesale Society who then owned the Village. The opening ceremony took place on Monday 21st June 1920 and the building continued in use until the mid-1970s.